The night was humid and noticeably darker than most nights of the same lunar phase. Perhaps this was due to an irregularity in the oxygen/nitrogen mixture in the earth’s atmosphere, perhaps there was a massive alien battle cruiser parked in front of the moon, or perhaps I had simply forgotten to take off my sunglasses. Whatever the reason, I found myself wandering through the moist night air without any idea as to where I was going. Every now and then, a tiny flash of light would appear in the blackness and I would make an adjustment to my route hoping to find some avenue of non-ignorance as to the factual basis of my current location. And that’s when it hit me…or perhaps I hit it, I’m not really sure because as soon as it happened, everything went blacker than it was before.

As I lie there unable to move and unsure if I was even still conscious, I thought about what mysterious thing I might have collided with. After a few minutes I concluded that my ordeal had to have been caused by one of three possibilities: (1) A slave merchant who had now succeeded in capturing me and is currently loading my limp body on to a riverboat bound for Wyoming. (2) The aforementioned alien battle cruiser sent down a reconnaissance vessel that, while trying to abduct me, missed with their tractor beam and accidentally abducted the manhole cover I was walking straight toward. Or (3), a parked ice cream truck. Whatever the cause, here I was just killing time unable to communicate with the outside world. I tried to play a game of sudoku in my head but i soon found that the human mind is worth less than paper and a pencil when playing number games. I’m not sure exactly how long I remained in this state or what the long term side effects will be, all I know is I woke up this morning and it was Wednesday.
Posted by Admin at 12:24 PM No comments: 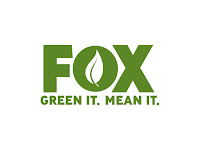 It amazes me how network television stations will change their logos to a green color and ask people to “go green” all because of earth day just because it’s popular to do so. I laughed last night as Ryan Seacrest stands on the stage of American Idol with millions of watts of stage and effects lighting blazing all around him and says “Idol is giving back to the environment by using green energy…at the finale in four weeks.”

Green is quickly becoming the most over used color in the spectrum…Why can’t we go blue? The sky is blue, the ocean is blue, the endangered blue whale is blue…but no, I guess green life on this planet has some kind of hierarchal priority over us non-green life forms. This enamorment with the color green has given birth to a whole new form of racism that spans all species of life rather than being concentrated within the human race. Pretty soon we’ll start hearing phrases like “Green Power!” and before we know it, the plants will revolt and ‘Attack of the Killer Tomatoes’ will finally become a reality.

In the spirit of Eco-friendliness, and to celebrate this past Earth Day while trying to prevent the Tomato uprising by not making them mad…I have developed a list of some things you can do to in order to be good ‘Stewards’ of this planet we all call home.

01. Save a tree, build miles and miles of unnecessary roadway in order to go around them.
02. Only buy green ketchup.
03. Paint your Hummer a green color.
04. Purchase the entire Captain Planet series on DVD and rather than driving your car to the store and causing more pollution, buy it online and have it shipped to your home in a large capacity UPS truck.
05. When drawing graffiti on public property, always use green aerosol spray paint.
06. Never cut your grass or pull weeds.
07. Build more wood-framed green houses.
08. Only ever eat green eggs and ham.
Posted by Admin at 12:29 PM No comments:

Green Eggs and Ham is a much-loved children’s book written by Theodor Seuss Geisel in 1960, the book is so loved in fact that is was the 4th best selling children’s book of all time in 2001.

Green Eggs and Ham begins by showing a young fellow bothering an older gentleman while he tries to read his paper. The bothersome chap’s name is Sam as he so eloquently indicates with a sign stating “I am Sam” that he holds while standing on the hindquarters of a galloping dog-like creature. We then realize that such ridiculous behavior is not so ridiculous and that Sam is obviously mentally challenged as he makes another pass with a sign stating “Sam I am.” It is likely that Sam possesses a rare form of Dyslexia wherein he confuses the order and orientation of words rather than that of individual letters, another explanation could be simple insanity. Hollywood has clearly picked up on Sam’s mental state and has made a live-action motion picture based on it. The film is titled ‘I am Sam’ wherein the main character shares similar mental limitations to those of Sam in ‘Green Eggs and Ham’.

As the older man (whom we will call ‘Phil’) becomes frustrated with his newly acquired irritation, he fumes about how he does not like “that Sam-I-am.” At that point Sam overhears Phil and quickly tries to quell the emotion by changing the subject and asking a completely random question, “Do you like green eggs and ham?” Sam now holds a platter with said edibles which I suppose he just carries with him at all times apparently to serve as a visual aide in case this situation should ever occur. Even more infuriated, Phil answers still mocking the backwards name thing, “I do not like them, Sam-I-am.”

So what is the message of all this? What is this Green Eggs and Ham trying to teach our children? First of all, it teaches kids to put rotten green food in their mouths…who has ever eaten a green egg and lived to tell about it? Perhaps little Jimmy is walking through the chicken house and finds an old egg that was missed in the hay 2 months ago. He cracks it open…Oh look! it’s green! Jimmy then recalls having this book read to him and proceeds to eat the aforementioned egg. Yes, not cool.

The second message this book sends to kids is that it’s okay to give in to peer pressure. According to this book, when your friend is offering you something you’ve never tried before like illegal drugs, go ahead and try it. Because after all you might like it and your happiness and appeasing your (insane) friend is more important than your personal convictions, your physical health, or abiding by the law.
Posted by Admin at 1:51 PM No comments:

As you can see from the time stamp on this post, today is April 2nd. By all known methods of mathematical reasoning and social standards for our calender, one would conclude that the day which preceded this one was in fact April the 1st. Such a conclusion would be 100% accurate but at the same time would fall short of what is to be considered as “the whole truth.” April 1st is not only the last day of the Assyrian New Year celebration (as everyone knows), but is also a time for outlandish shenanigans and prankification known to the modern world as April Fools’ Day.

The purpose of April Fools’ is of course to make one’s self esteem maintain the illusion of superiority over our fellow man by pulling hilarious practical jokes on them and therefore making the victim appear foolish while the instigator is rewarded with the appearance of genius. In other words, April Fools’ Day grants everyone free rein to spread lies and deceit without any ramifications or consequences simply because “it’s April Fools.” With that being said, I pose the question; “What are the rules of April Fools’?” (That rhymed, unintentional).

Rule #1: Don’t kill anyone or indirectly cause the death of a live human being.

Rule #3: It’s okay to put a rubber band around the trigger of the retractable sprayer on the kitchen sink as long as it does not violate the first rule.

Rule #4: Hiding all your Dad’s tools in the tank of the toilet probably isn’t a good idea.

Rule #5: Switching the salt with sugar and the sugar with salt is old and overused, instead, switch both of them with granulated cauliflower, again as long as it does not violate rule #1.

Rule #6: Putting peanut butter under the door handle of someone’s car then video taping them while they go to open the door is an excellent way to win friends and influence people.

Follow these rules (which are really more like guidelines) and you are 110% guaranteed to have a fun and enjoyable April Fools’ Day or your money back.
Posted by Admin at 1:54 PM No comments: