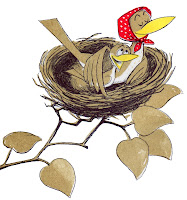 In the spirit of last Sunday’s Mother’s Day, I bring you some of the Best and Worst Mothers in History…not in any particular order other than Worst first, Best last.

- The Mother Bird from Are you my mother?

This one makes our list for obvious reasons, what kind of deadbeat mom leaves their child in a straw basket 100 feet above the ground for hours on end? This poor fellow had time to walk the entire country side in search of his mother – who is also apparently deaf because she heard not one of his woeful cries. If not for a kind and generous ‘Snort,’ there is no telling what this mother’s irresponsible behavior might have led to.

- Bertier’s Momma from Remember the Titans

Once Gary Bertier stepped onto that bus, he didn’t have no Momma no more…he’s got his brothers on the team, and he’s got his Daddy, and we all know who is Daddy is don’t we? She was there watching her son be torn away from her and yet she did nothing. Also, Bertier’s Momma is rumored to go out on the town with High School jocks and have a hairy back.

So Wendy flies in to Neverland to find the band of lost boys who were getting along just fine. Rather than contributing anything useful to this rag-tag community, Wendy shakes up the established social equilibrium and informs the lost boys that they have to have a mother in order to…something. Anyway, so Wendy promises to be the mother these boys have never had. She sings them to sleep and tucks them into bed then without so much as a home-cooked meal flies away to London never to see them again.

Charlotte is a spider who lays hundreds of eggs then places them all in one basket, first mistake. Charlotte then abandons her unhatched young by dying, third mistake. Charlotte’s second mistake was that before she died she left her eggs in the care of a dirty, spoiled pig. The results of said action are catastrophic…Wilbur the pig transports the baby spiders in his mouth which is obviously not the safest or most sterile environment. Once the eggs hatch, Wilbur allows the spider babies to parasail into the wind within moments of being born. Charlotte won’t be winning mother of the year anytime soon.

- Coral the Clownfish from Finding Nemo

Coral is Marlin’s Clownfish wife who has just laid hundreds of eggs in their new home on a reef. When a mean old barracuda comes along, Coral is told by Marlin to keep still and that the kids will be fine. Coral, instead of heeding her fishy husband’s advice (or ahem, command), bolts toward the eggs and provokes the predator to attack. The end result is Coral’s own death, Marlin being knocked out and all but one of the kids being eaten. It is also quite possible that the ordeal caused injury to the remaining egg while the embryo was developing which is why Nemo has a gimpy fin. Thus, the whole plot of Finding Nemo would not have happened if Coral hadn’t snapped.

She was such a good Mother that they named her after it. She also did some humanitarianistic acts or something.

Norman Bates’ mother was so good to her son that she stuck around after her death to keep an eye on him and make sure that he always believed that a boy’s best friend is his mother. Taking up residence in half of Norman’s mind…Mother became the son but then took over, so now there is only mother.

The Alien Queen is the definition of what a dedicated mother should be. When her eggs are destroyed via grenade and flame thrower, she gives chase relentlessly to the point of near insanity to avenge her slain young. When the compound is imploding around her she uses her keen wits to grab onto the outside of passing space shuttle and continue the fight on the mother ship. Once there she does some damage and is eventually spaced due to the evils of robotic mechanized forklift suit technology. She is indeed a great mother to her charred alien kids…
Posted by Admin at 1:01 PM No comments:

Popular in the 1990s, the Where’s Waldo? (WW?) books were a pop culture phenomenon as the world rose up, shook it’s collective fist at the sky and cried out with one unified voice “WHERE’S THAT BLASTED WALDO?” A pure source of frustration and strained retinas, WW? is in essence a large illustrated book wherein the main character Waldo is hidden amongst huge populations of humanoid cartoons. It is the reader’s job to scan this mass of humanity until Waldo is located, the page may then be turned and the process begins again with a whole new bevy of generic unimportant people.

Little is known about Waldo himself, he is obviously fond of wearing the same outfit everywhere, everyday. He wears glasses and always seems to be aware that he is being searched for because he’s always looking at the reader. Some have theorized that the truth is that Waldo is not a human at all and that he was born on a distant planet called Waldezma. Whatever the case, Waldo has created an obsession for little boys and girls since 1987 with no signs of slowing down.

So what can be learned from this colorful book? The fact is that Where’s Waldo? is basically a training manual for future spy satellite technicians. Marketed to children because of it’s cartoony, innocent appearance, WW? is no doubt a government funded program aimed at embedding spying skills into children so that said skills can then be harvested once the children are grown. Although this could prove helpful to America’s cause, how easily could this dangerous material be placed into the wrong hands? WW? has been distributed to countless countries in countless languages, and that’s not even the scariest part…imagine if the these books were misplaced during the zombie uprising, it’s terrifying to think about. ‘Where’s Waldo’ also has the same acronym as ‘World War’…coincidence? I don’t think so.
Posted by Admin at 12:58 PM No comments: