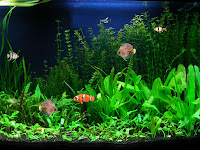 Henry Peterman sat on his mother's kitchen stool all alone. His chubby fingers clutching at the cushioned seat and his feet dangling in legato movements though the small volume of atmosphere he was currently inhabiting. Shut out from the world and everything around him, Henry was not even conscious of the loud siren blaring in the distance down the street from his house let along the maelstrom of violence his moving legs were imposing on the Oxygen and Nitrogen molecules that surrounded him.

If Henry's mind could be photographed at this moment, we would see pure blackness contrasted only by a rectangle of colors and light at the center of the frame. Each subsequent photo taken would be exactly the same in that respect and yet different somehow as though the contents of the quadrilateral shape were in motion. Accompanying this image would be the sound of a low whirr and an unending gargle of bubbles garnished with the gentle flow of water.

Henry had no concept of time in this state and was completely unaware that he had been in this trance for over 3 hours. All at once Henry was rushed back to reality as his mother walked through the door. All the blackness in his mind was quickly replaced by the walls of the kitchen and his feet found the floor as he slid off the bar stool. Turning around still slightly shocked from the travel between realities, Henry looked at his mother. "Henry" she said. "Come away from the aquarium and help me carry in the groceries." Henry obeyed without a word and walked out to the car. Just then, something in the glass fish tank caught Mrs. Peterman's eye. Leaning in to get a better look she let out a shrill scream that Henry heard from the garage. Running to aid her, Henry found Mrs. Peterman lying on the kitchen floor soaked with aquarium water and surrounded by blue pebbles, plastic plants, and hundreds of perfectly cut 1/2 inch squares of glass. The 24 pet fish were nowhere to be found.
Posted by Admin at 2:40 PM