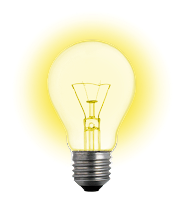 In the course of human events it often becomes necessary to enlighten those who are less “lightened” than ourselves. The lightenedest of scholars have spent an ambiguous number of decades attempting to discover the complex and irrefutable method for bestowing this “enlightenedness” upon the endarkened members of society. Massive volumes of books and journals have been published to explain these phenomenon and the best they have come up with so far is the analogy of a light bulb coming on inside a person’s head once they come to the realization that whatever they were thinking about, now makes sense.

What they fail to tell you is that the light bulb isn’t failsafe and often comes on at the worst possible time. Just for the sake of argument, imagine Billy, our unenlightened friend, is staring over the edge of a cliff into an enormous precipice. At the base of this precipice sits a huge pile of chainsaws and a pack of hungry snow tigers…while Billy is thinking about what it would be like to fall from such a height, the light bulb in his head suddenly switches on and his mind tells him that jumping into the air from his current position would be both a good idea, and actually quite fun. The light bulb continues to burn as Billy rationalizes…..”it’ll be like flying”…”scars are cool”…”chicks would dig me”… Meanwhile, the group of lemmings that have been watching the whole ordeal from a nearby cliff are persuaded by Billy’s nonverbal communication to do exactly what he is thinking. Case in point.
Posted by Admin at 12:15 PM